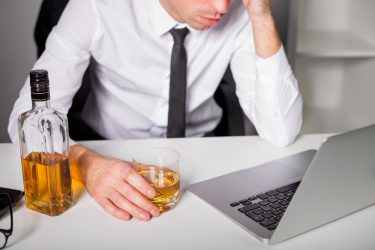 New research has revealed that as many as 89,000 people are turning up to work hungover or under the influence of alcohol every day, costing the economy around £1.4 billion a year.

Earlier this year, Lloyd’s of London featured in the news after rolling out a new code of conduct in a bid to remove the drinking culture that had long been associated with the London insurance market.

The report conducted by the Institute of Alcohol Studies (IAS) found that 42 per cent of workers had been to work intoxicated or hungover with 9 per cent of these having done so in the past six months.

High earning workers were the most likely to have gone to work hungover or under the influence with 55 per cent of respondents earning over £60,000 admitting to this compared to 29 per cent of those earning under £10,000 per year.

Respondents to the survey reported being affected by colleagues drinking at work with a little over a third (36 per cent) of people suspected that one or more of their colleagues had been hungover or intoxicated in the last six months.

Many were unhappy with the effect their colleagues had on the company, with reduced productivity, greater stress and a negative effect on the team’s morale.

Based on average labour costs, and how frequently people are impaired at work, it is estimated that drunk workers cost the UK economy somewhere between £1.2 billion and £1.4 billion a year.

Suzannah Robin, an alcohol and drug safety expert at AlcoDigital said: “The findings from this study are not surprising. Over the last 15 years, AlcoDigital has worked with many companies assisting them in managing the impact of alcohol in the workplace, helping them develop drug and alcohol policies to deal with the loss of productivity and safety issues arising from excessive alcohol consumption.

“The findings highlight the negative impact this can have on a business and the benefits around testing employees to promote a better work environment.”